Kwantlen Polytechnic University in Canada. In a semester-long design studio, a group of students developed the concept for the habitat, based on requirements and input lectures given by the CHILL-ICE team, resulting in a prototype of ECHO, the Extreme Cave Habitat Once, which was subsequently transported to Iceland for in-simulation testing during the two CHILL-ICE missions.

ECHO was singed to accommodate a crew of three and offers approximately 40 cubic metres of habitable volume. The self-supporting habitat follows a barrel-vaulted design with a single egress/ingress point via an airlock. The dimensions of ECHO are approximately 4.0 x 3.5 x 2.1 m, with a footprint of approximately 4.2 x 3.5 m.

An external lightweight nylon fly nylon protects the shell against any lightweight falling debris, as well as facilitates water drop-offs. The main layer is constructed of the spun-bound polyethylene tyvek. Four inflatable beams, as well as two poles carry the structure. A set of removable floor pads, constructed of three layers from cordura nylon, mylar, and open cell polyurethane foam provides a certain amount of thermal insulation, as well as some protection from the uneven basalt cave floor to create a durable surface for a large range of activities during the CHILL-ICE missions. Additionally, a set of inflatable mylar pillows can be installed on the interior walls of ECHO, for some added thermal insulation. These inflatables serve the double purpose reflecting any light sources inside the habitat, to provide better illumination conditions.

The choice of these lightweight materials results in an overall weight of only 30kg; in its undeployed state, the various parts of the habitat are stored in two bags, which can be easily transported into a lava tube skylight by the three analog astronauts.

ECHO offers a flexible spatial setup, which allows for a multiplex approach of use of the interior space. This enables the analog astronauts to switch between activities during the day, including, but not limited to, scientific research, maintenance tasks, daily workouts, meal preparation and sleeping. A set of pockets running run lengthwise in the main volume of the habitat provides safe storage space.

During the CHILL-ICE missions Luna and Lava, ECHO reached it’s design objective by proving it can be set up by a three person crew in full simulation space suits within a time limit of 8 hours, as well as support said crew for a three-day analog mission in a lava tube.

The Photovoltaic Energy System (PVES) has been designed and built specifically for this mission. Because of the remote location of the Stéfanshellir lavatube no grid electricity is available. Also, setting up the power system was thought to be a good job for the analog astronauts, as it adds to the realism of the mission.

Both the BMS and the inverter provided a multitude of safety features to the PVES, including battery undervoltage, overvoltage, overcurrent, under-discharge, over-discharge and inverter over-temperature, overcurrent and overheating protection. Because of these protection systems the PVES would safely shut down in case of overload or low battery voltage. These situations both occurred during the first and second missions.

In the first mission the crew were cold and decided to turn on the emergency space heater (2 kw) we provided them. After a few minutes the power would go out because the overcurrent protection of the inverter had kicked in. Luckily the space heater was also able to operate at half power level and with that the crew could heat up the habitat a little. At least until the battery ran out of power about one hour later. When the sun came out the following morning the system started charging automatically and the power was quickly restored.

In the beginning of the mission we were unsure if we could get enough solar energy to fully charge the system during the day. As a lot of other research was reliant on electrical power to be available. Luckily there was plenty of sun during the first mission and we were able to charge the batteries completely full before the end of the day (fig. 1).  Unfortunately, we don’t have any data on power usage, because the PVES was built in a very short timeframe. For next missions we are planning to add more in-depth logging functionalities.

The second mission had a little les sunlight as it became cloudier, however they also consumed less power and didn’t use the space heater. Unfortunately, the PV power generation logs for the second mission aren’t available at the time of writing.

The setting up of the PVES was experienced to be very easy by the astronaut crews from both missions. Even with the very minimal training they’ve had (about one hour theory and one hour practice), they were able to successfully setup the system and have electrical power available inside the habitat. See fig. 2 for a picture of the setup outside the cave. 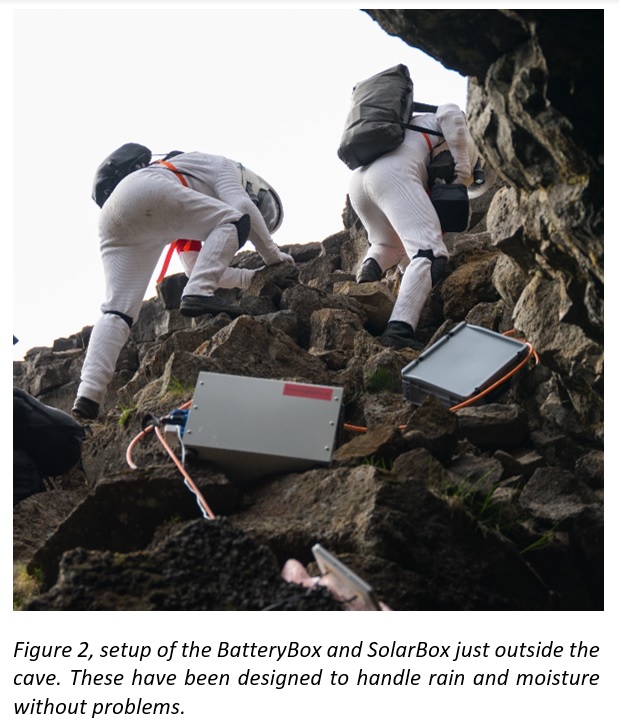 Project Area:
Knowledge of astronaut location during an analogue simulation mission is essential
information for both the astronauts in the field and support staff in the Mission Control Centre (MCC). In the current CHILL-ICE protocol, location information is relayed verbally, through radio or via internet communication, which can be inaccurate and cause confusion.
Furthermore, MCC monitors and receives this information over a rolling 24 hour basis for the duration of the simulation. This can often be impractical, as Support Staff need to rotate shifts overnight, affecting sleeping patterns and risking performance and vigilance degradation.
This shows there are two main improvements that can address these issues: camera
surveillance (hardware-oriented) and automated monitoring (software-oriented). Setting up cameras around the habitat and surrounding environment, or inside suit helmets, with video feed linking to Mission Control, would solve the hardware aspect of the problem. This project focuses on the software side: delivering an automated way of monitoring the video footage.

SpotNet:
SpotNet is an image detection model powered by the latest advancements in the field of artificial intelligence and machine learning. The goal of SpotNet is to autonomously detect and monitor the location of astronauts in the field from video data. Currently at the proof-of-concept stage, we have achieved fast and accurate detection of astronauts from footage captured during the recent successful CHILL-ICE lunar simulation missions, which took place in Iceland this year. This footage is an assortment of video and image data which was split into individual frames and manually annotated to highlight the location of astronauts within the scenes. These were then fed into a machine learning object detection model, with the objective of learning the positions of the astronauts within the wider image content. You can see an example of these annotated scenes below.

Figure 1: Model training data samples, annotated by hand
The model trained on over 350 of these examples and was tested on a small subset of unseen footage. You can see an example of some of these detections below, as well as animated GIFs attached separately.

Figure 2: Predictions made by the model on new data
As can be seen above, the model is able to clearly detect astronauts over a range of different scenarios, backgrounds, distances and lighting. The value next to “astronaut” on each red bounding box dictates how confident the model is for that given prediction, e.g. 0.96 means the model is 96% confident that the box contains an astronaut. It can be seen the model confidence varies depending on the image. This is due to the available training data, which vastly influences the predictive power of the model when detecting new images. For instance, the 55% confident prediction on the middle row, right-hand image is likely a result of a shortage of training images showing an astronaut with such a rocky background. Similarly, the model was partially trained on video data split into frames. Some frames in the testing subset, i.e. the images meant to be new to the model, were taken from the same video as frames in the training subset. This means the model is already familiar with some of the test data, making its supposed confidence less reliable for some examples. Therefore, the next step of the project is to try and improve the quality and quantity of the training data, to make a more robust and generalizable model.
Similarly, a key feature of the model will be real-time astronaut detection. Whilst dependent on final processing power availability, the model used in this project is capable of very fast detection, with certain architectures able to detect at speeds from 50 to 100 frames per second. The model architecture is still changing, but we are confident we can maintain a high rate of detection, at least above real-time speeds. 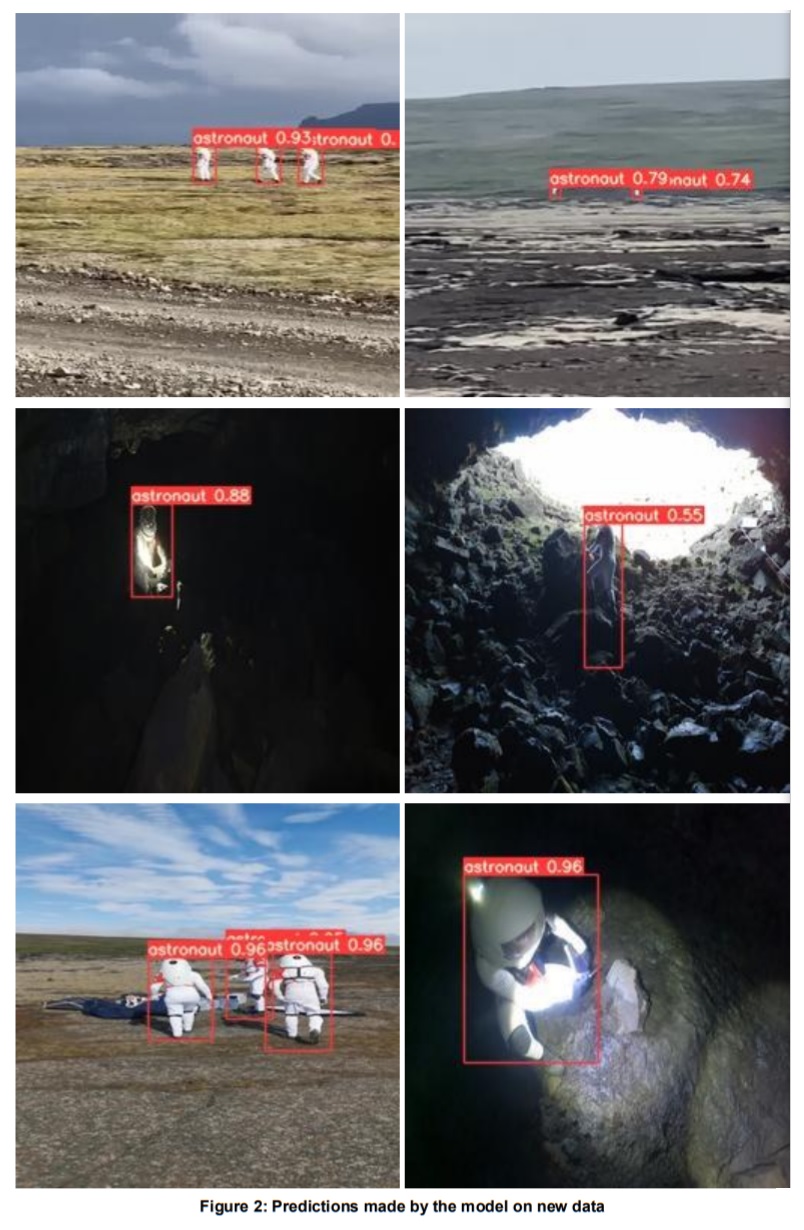